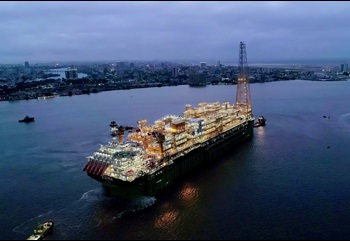 The OML130 block, encompassing 648 square kilometres, is a deepwater project comprised of four oil fields: Akpo, Egina, Egina South and Preowei. Akpo – one of the world-class discoveries drilled in the OML130 block – has maintained stable net production of 56,000 bbls/d since 2009.

Production from the Egina Field, also in the OML130 block, commenced in early January 2019. The Field is located 150 kilometres off the coast of Nigeria in approximately 1600 meters of water. The development consists of a Floating Production Storage and Offloading (FPSO) unit and a Subsea Production System. The project is expected to reach its peak production of approximately 200,000 bbls/d in 2019.

Production and potential in Usan

The Usan oil development is located 80 kilometres off the southern coast of Nigeria. Discovered in 2002, the Usan field began producing oil in February 2012.

Located in depths ranging from 780 to 850 metres of water, the Usan field development is comprised of a subsea production system linked to the Usan FPSO and an offloading buoy to accommodate export tankers. The Usan FPSO and subsea facilities were completed and primarily installed during 2011.

See where we are exploring around the world