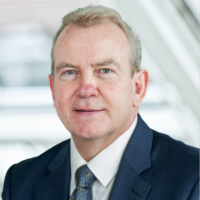 Ray has over 35 years of experience in the global Oil and Gas industry, mostly in production operations but has held senior roles during extended assignments in business development, human resources, major construction projects and Health, Safety and Environment (HSE).

During his career he worked for Occidental Petroleum, and thereafter Elf, during which time he was an Offshore Installation Manager on two North Sea installations before assuming the responsibilities of Field Manager for the Piper and Saltire fields.

Thereafter, he was appointed Operations Manager for Total E&P UK Ltd’s Elgin Franklin field, which at the time was the world’s largest HP/HT gas field and held this position during the design, construction, and commissioning and production start-up of the installation.

Following an international posting, he was appointed to the executive committee of Total E&P UK Ltd, as HSEA Director, where he remained until joining CNOOC International in March 2011 as Planning and Performance Manager. Within CNOOC, he moved into the roles of Regional Operations Manager in December 2011 and UK Operations Director in September 2013, and as Managing Director in June 2015.

He also holds the position of the Prince of Wale's Scottish Ambassador for Business in the Community.

He is a past Director of the Scottish Chamber of Commerce, OPITO and the Offshore Training Foundation, and a past member of the Scottish Governments Energy Taskforce, Step Change in Safety Leadership Team and the OGA Asset Stewardship Taskforce.

A graduate in mechanical engineering from RGIT, Ray also holds a MSc [Dist] in Offshore Engineering majoring in production, drilling and reservoir technology.

A UK National, Ray is married with two children. His hobbies include Hillwalking, skiing, and reading.