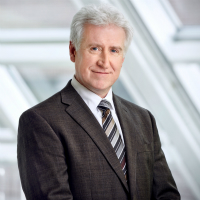 Patrick is a seasoned exploration leader with over 30 years of experience in the energy industry across the globe. Before joining CNOOC, he was the head of commercial activities for Shell at the company’s headquarters in The Hague. Prior to that role, he was Vice President and General Manager, Exploration & Local Senior Upstream Representative for Shell China in Beijing. While in that position, Patrick significantly grew Shell’s unconventional business in that country, amassing a team of over 300 people across multiple offices and establishing the company as an upstream leader.

In addition to Patrick’s experience in Asia and Europe, he has also worked in the Middle East and West Africa where he led Shell’s deepwater exploration portfolio in Nigeria.

Patrick holds his Bachelor of Science (Honours) in Geology and his Masters of Science in Interpretation Geophysics, both from London University.